How To Make Sure Caregivers Get Paid On Time

A common trend that Participant Liaisons see across the board is that caregivers may not always receive their mailed paper checks on pay day.  We end up with a high call volume and often confirm that checks have been cut and mailed out, but since we have no way of tracking things through the postal service, we cannot guarantee an exact date that checks will arrive.

The best way for caregivers and employers to guarantee that payments are received on pay day is signing up for direct deposit.  This ensures that money goes directly to the caregiver’s account on pay day, while the check stub may still arrive in the mail a day or two later.
It’s understandable that sharing back account information is not for everyone.  But, there are options for direct deposit without a home bank.  Companies like Visa and MasterCard offer re-loadable money cards/debit cards through places like Walmart that act like a bank debit card (cards available for a small upfront fee and with small monthly service fees).

Encourage the consumers you serve to sign up for direct deposit!  There are many stresses on consumers.  Direct deposit takes away the worry of wondering when a paycheck will arrive.  Setting up auto-payment through direct deposit helps get caregivers paid timely and accurately and helps long-term care programs run more efficiently.

Learn more at iLIFEfms.com.
Posted by Unknown at 6:56 AM 17 comments:

What the Americans with Disabilities Act Means 25 Years Later

The Americans with Disabilities Act (ADA) was signed into law in 1990. At the time, the ADA was the world’s first comprehensive civil rights law prohibiting discrimination in employment, transportation, and public programs based on disabilities. This year, the ADA celebrates its 25th anniversary…and there is a lot to celebrate!

The Legacy of the ADA
Because of the ADA, people with disabilities enjoy the benefits of wheelchair ramps and lifts on buses, accessible bathrooms, and books offered in Braille at public libraries. Universal design is now the “gold standard” in retail product development and architecture. Assistive technologies and devices that increase capabilities of people with disabilities have made it easier than ever to fully participate in society.
However, there are significant shortcomings. Despite major strides, the employment rate for people with disabilities is 17.6%. Barriers to accessibility persist in areas like voting and education, and discrimination and bullying are still rampant problems.

The ADA: The Next 25 Years
Despite these obstacles, I remain optimistic. The last 25 years have empowered a new generation of activists who have lived their entire lives during the ADA era. Many Americans have grown up believing that central to the ADA is the notion that every human has the right to be free. It is my belief that we will not only continue to hold businesses, lawmakers, and society at-large to the highest possible standard in upholding the tenets of the ADA but also strive to broaden its scope over the next 25 years and beyond.

We use the infographic below as a training tool for internal education about the history of disability rights. We also share it with consumers and the people we serve to celebrate the ADA anniversary and the work that remains.


Please share this infographic and think about how your organization can support people with disabilities for the next 25 years and beyond. 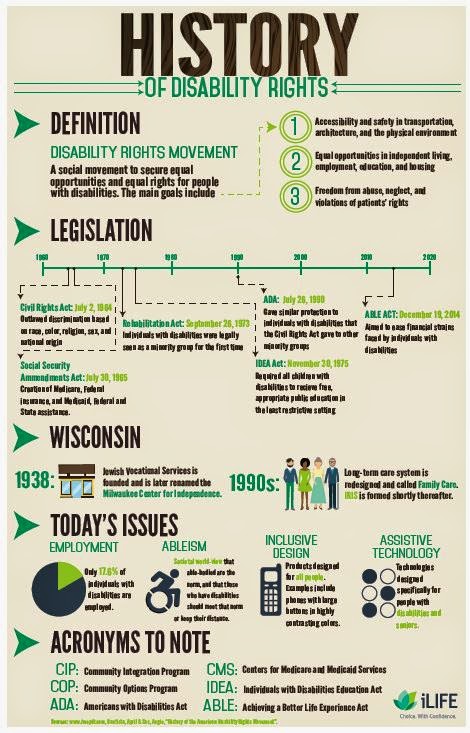 Posted by Unknown at 7:50 AM No comments:

What is a Medicaid Waiver?


What is a Medicaid waiver?
Home and Community Based Services are available through waiver programs.  Centers for Medicare and Medicaid (CMS) allows states to “waive” certain Medicaid requirements and pay for home and community based services as an alternative to institutions, nursing homes or hospitalization.  These Medicaid waivers help provide services and to allow people to receive long-term care in the community and in their homes.  Waivers are also ways states can test new or existing ways to deliver and pay for health care services in Medicaid and the Children's Health Insurance Program (CHIP).


Types of Medicaid waivers
There are four primary types of waivers and demonstration projects: 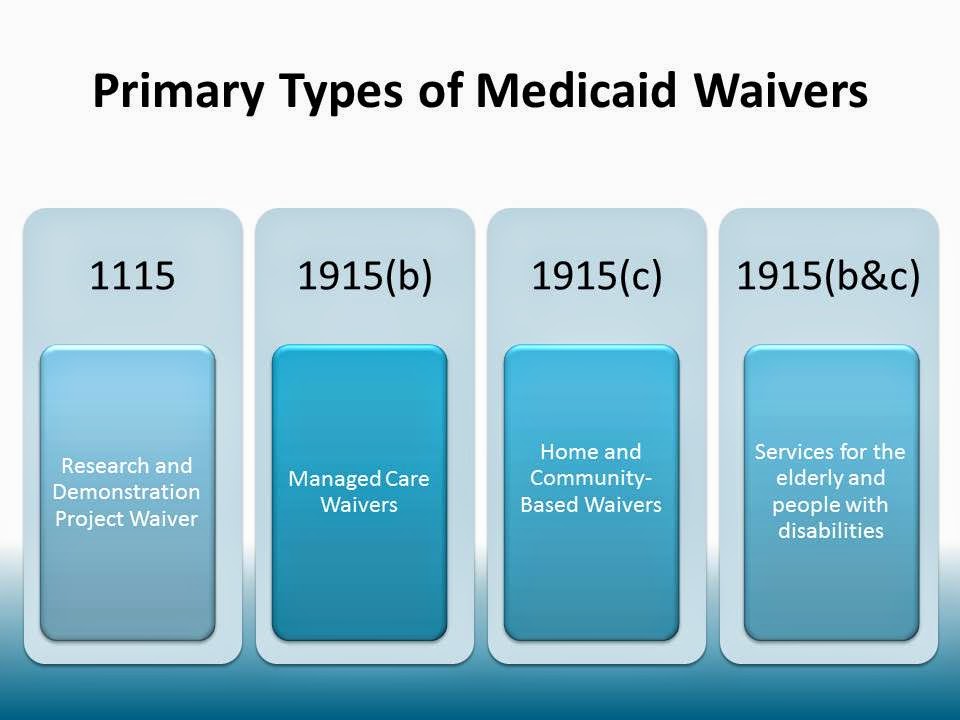 Medicaid HCBS can be provided as part of state-plan services or through waivers. State plan HCBS include mandatory services (all states must offer them), and optional services (offered at state discretion). Whether the services are mandatory or optional, if they are provided under the state plan, they must be offered to all eligible individuals. Services provided under waivers may be restricted to specific groups based on geographic region, income, or type of disability. Waivers may include a wider range of service types than can be provided under state plans. Individuals may receive both state plan and waiver services.

Posted by Unknown at 8:03 AM No comments:

March is Developmental Disabilities Awareness Month. This, as well as the celebration for the 25th anniversary of the Americans with Disabilities Act all year long reminds me that we have made a lot of progress.  But, there is always more to do.

These reports from National Core Indicators show the percentage of people with developmental disabilities who have paying jobs in their community. 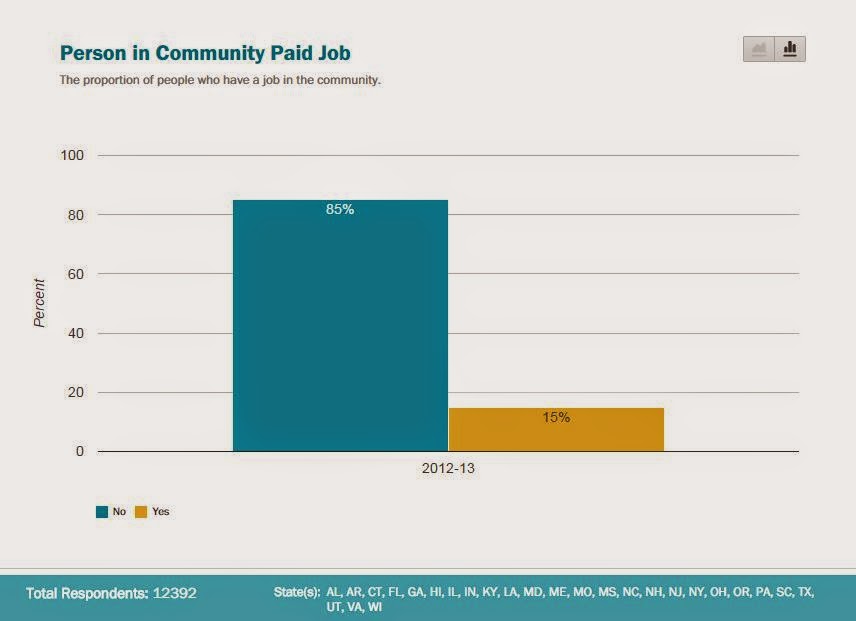 Of the 26 states surveyed, the average is just 15%. Wisconsin’s average is slightly higher at 22%.  North Carolina sits at 12%.  This data shows that we need to do better and must continue helping people with developmental disabilities live and work in their community.

NCI has a great collection of searchable data at nationalcoreindicators.org.

Posted by Unknown at 9:52 AM No comments:

Last month, I had the great opportunity to present “Who’s the Boss: Transition Age Youth and Employer Authority” at the 2015 Wisconsin Transition Conference in Wisconsin Dells.  The conference is a chance for educators, professionals, families, and transition age youth to come together and share best practices.  The conference opened up many fascinating discussions about community-based employment, higher education, adaptive technology, home and community-based services, and self-determination.

In both “Who’s the Boss” and many other sessions at the conference, I found myself reflecting on a common theme: expectations.  How do we understand the expectations of the individuals and families we serve?  We often talk about what individuals and families can or should expect from their educators or their employers, but we don’t always discuss what young people can or should expect from their caregivers.

Clarifying expectations is crucial to successful employer authority.  In my recent post, I highlighted how self-directed programs allow participants decision-making authority in recruiting, hiring, training, and supervising caregivers of their choice.  When a participant or member chooses to exercise this employer authority, they take on the role of a boss.

Participants and members frequently hire “inside sources” (people they already know) to be their caregivers.  While you might not think interviewing a parent, spouse, sibling or friend is necessary, establishing clear expectations is very important.  When I am out in the community and talking to folks, this issue comes up again and again.

Making sure both the caregiver and care recipient are on the same page from the beginning can facilitate a healthy caregiving relationship.   Check out the slide below for some tips on establishing clear expectations with family or friends. 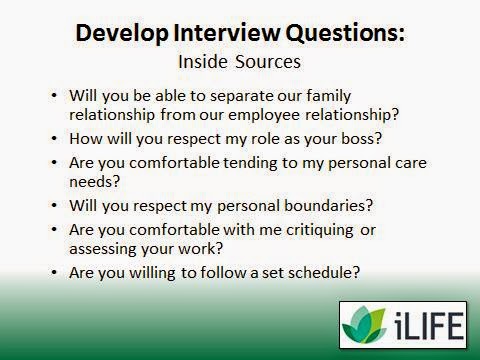 Filling in the Blanks of Managed Care

I have a background in healthcare and technology so I am accustomed to acronyms, industry terms, and catchphrases.  “If you know one ______, then you know only one ______” gets a lot of mileage. I have heard this expression used in a wide array of settings to convey complexity and uniqueness. My question is how does it translate into managed care?

I recently attended the Medicaid Managed Care conference hosted by World Congress in Washington D.C.  This event brings together an impressive group of leaders from managed care, long term care, CMS, state and Medicaid organizations.  Each leader brings a unique perspective, industry expertise, and desire to collaborate for the benefit of the individuals served.

A managed care model is utilized to finance and deliver healthcare to primary and acute patient populations. The goal of a managed care organization is to improve the quality of patient care while simultaneously reducing the cost of health benefits.

Medicaid managed care leaders emphasize that the incorporation of stakeholder engagement is essential to the development of an integrated Managed Long Term Services and Supports (MLTSS) program. The design of an MLTSS program seeks to uncover how managed care can be sensitive to the unique needs of a given population in a delivery model where streamlined supports are services are the goal.

In other words, the goal when filling in the blanks should not be “one word fits all”.  We must recognize how words can elevate individuals and their uniqueness and complexity when redesigning models of care.

Learn more about iLIFE
Follow iLIFE on Twitter
Connect with iLIFE on LinkedIn
Posted by Unknown at 10:22 AM No comments:

Person Centered, Person Driven: Key to the Success of MLTSS


Over 10 Million Americans with disabilities use Long-Term Services and Supports (LTSS) to assist in their self-care, engage in their community, and achieve their goals of living independently.

Medicaid is the primary funding source for most people receiving services. Each state has its’ own pathway for people to access LTSS.  With increasing frequency, states are moving to Managed Care models.

The movement towards Managed Care is driven by the need to contain costs, ensure quality, and mitigate risk.  Keeping enrollees central to the focus ensures that a quality management system will meet the unique needs of the population being served.  Consumer engagement initiatives also allow for the understanding of quality from the perspective of the people who are being served.

Managed Care programs have long served people with disabilities.  One such Managed Care program in Wisconsin is Family Care. Family Care enrollees have moved back into the community safely after spending years living in institutions, while other enrollees have achieved new levels of independence by living and working in their communities. Most enrollees can boast vast improvements in overall health. These successes are achieved by two principles that are the hallmarks of Family Care: person-centered planning and disability services expertise.

We are at a unique juncture: paralleling the movement towards Managed Care has been the growth and popularity of Participant Directed Programs.  It strikes me that bridging two key aspects—person-centered planning and quality management—might result in a delivery system with improved results.

I look forward to working on just that.